Who is JMJ? In 1948, French electronic musician Jean-Michel Jarre was born in Lyon. His mother, France Pejot, was a Lyonnaise resistance fighter and concentration camp survivor, and his father, Maurice Jarre, was a composer of film music (including the soundtracks to David Lean’s “Lawrence of Arabia” and “Doctor Zhivago”).

Like many pop and rock stars, Jarre has undergone multiple phases in his career. Starting with analogues synthesizers in the 1970s and 1980s, he then turned to digital instruments and other genres (including jazz) during the 1990s and 2000s, before returning to his roots with the “Oxygène” and “Équinoxe” sequels plus the “Electronica” albums in the 2010s.

However, apart from the forms of music he has composed, throughout his career, his musical inspirations have reflected the developments of the day, from the East-West divide in the 1980s through to mobile phones and the loss of online privacy in the 2010s. He has also been one of the top ambassadors for French electronic music for nearly fifty years, influencing multiple generations through his albums, but also via his large-scale outdoor concerts with spectacular light and laser shows that have been held all over the globe.

Origins. Although he did not live long with his father, composer Maurice Jarre, who moved to the US when he was just 5, Jarre had a number of musical and technical influences as a child, including: his mother’s father, who was an oboe player and audio engineer; the street music performers he used to watch and listen to from his grandparents’ apartment; and his visits to Parisian jazz club “Le Chat Qui Pêche” with his mother where he encountered the likes of Chet Baker. After a stint as an artist, he went on to take lessons at the Conservatoire de Paris, and in 1968 Jarre joined the Groupe de Recherches Musicales (GRM) of Pierre Schaeffer who had developed the “musique concrète” (real music) movement and became an early mentor of Jarre’s. During this time, Jarre also worked at the studio of famous composer Karlheinz Stockhausen in Germany. It was with Schaeffer that Jarre discovered the Moog synthesizer, and he created a small synthesizer-heavy studio for producing music in his own flat. He used this to compose music for a number of movies, and also worked on the lyrics and music for some popular French singer-songwriters including François Hardy.

The Hit. Jarre recorded his first major album “Oxygène” at home in 1976, using synthesizers and a multi-track recording system. He found it difficult to get a record deal, but Hélène Dreyfus, who had also been in GRM with Pierre Schaeffer, persuaded her husband Francis Dreyfus to give him a chance on his label Disques Motors, later Disques Dreyfus. It worked out well for Dreyfus, because the album went on to become one of the best selling French albums of all time, selling 18 million copies worldwide [Salazar-Winspear, 2016].

Concerts vs. Albums. Although it has become a more modern trend to focus on concerts as opposed to albums, Jarre was an early adopter. After his follow-up album to “Oxygène”, “Équinoxe”, he held his first big concert on Bastille Day 1979 at Paris’ Place de la Concorde. There were a million people in attendance, which gained him a mention in the Guinness Book of Records. In fact, this was a record he went on to break three more times, and he still holds joint first place for the largest concert ever: 3.5 million people in Moscow in 1997.

Bridging the East-West Divide. Following the release of his next album “Magnetic Fields” in 1981, Jean-Michel Jarre became the first Western pop star to play a concert in communist China. Prior to this, he had just become the first Western musician to have his records played on Chinese radio, and he was subsequently invited by the Chinese Government to give two concerts in Beijing and Shanghai, playing his famous “Laser Harp” instrument there for the first time. These concerts were later released on album as “The Concerts in China”.

Music: Industry or Art? In 1983, Jarre recorded an album called “Music for Supermarkets”, but only cut a sole copy of the record onto vinyl, in an apparent rebellion against the commercialisation of music:

“In a time when everything is standardized, overbroadcast, a time when we are endlessly overinformed, saturated with sounds and images, it seemed to me worthwhile to demonstrate that a record is not only a piece of merchandise without value, infinitely multipliable, but it can be, like a painter’s picture or a sculptor’s bronze, an integral part of a musician’s creation.” [Palladev, 2017]

After being broadcast (and pirated) in mono on AM Radio Luxembourg, the record was auctioned in a mode akin to an art piece. To protest against what he called the “silly industrialisation of music”, Jarre had the master tapes destroyed. However, some parts of “Supermarkets” made their way onto his next experimental album “Zoolook”, where Jarre tried out a new approach towards producing “ethnic music” by substituting the notes of a synthesizer with audio samples of various languages from all around the world.

To Space. With his ambient electronic sounds often associated with space and technology, Jarre composed one of the pieces on his next album “Rendez-Vous” to be played by astronaut and saxophonist Ron McNair during a NASA space mission. Unfortunately, the Space Shuttle Challenger with McNair on board broke apart just over a minute into flight on the 28th January 1986. At a concert in Houston in April that same year, “Ron’s Piece” as it became known was played by their mutual friend Kirk Whalum. The concert itself was another record breaker in terms of attendance, with up to 1.5 million people attending.

Technology Revolution. With the rise of personal computers in the 1980s, Jarre composed the album “Revolutions” which musically described the various stages of industrial and technological development, from the Industrial Revolution through to the (then) modern day advent of televisions, robotic production lines and computing. Much of this conflict between technology and what it enabled (or stymied) is reflected in the vocoder (synthesized human voice) lyrics to his song “Revolution/Revolutions”:

Mobile Phone Love: After some more experimental albums in the 1990s and 2000s (including the 47-minute track “En Attendant Cousteau” in 1990, his first mostly lyrics album “Metamorphoses” in 2000, and the jazzy ambient albums “Sessions 2000” and “Geometry of Love” of 2002 and 2003), Jarre went on to collaborate with a variety of popular musicians and even public figures on his two “Electronica” albums in 2015 and 2016, ranging from sci-fi/horror film director (and composer) John Carpenter to the Pet Shop Boys. On the first “Electronica 1” album, in a third collaboration with Laurie Anderson whom he had previously worked with on “Zoolook” and also on his 2000 album “Metamorphoses”, the song “Rely on Me” provided a wry take on our relationship with mobile phones [Anderson and Jarre, 2015]:

As Jarre said in an interview with [Venker, 2015]: “I wanted to do a love song with a connected object. … We touch those things more than our partners most of the time.”

The Right to Data Privacy: On the 2016 “Electronica 2” track “Exit” with the US whistleblower Edward Snowden, Jean-Michel Jarre and Snowden tackled the right to privacy and the manipulation of big data. Snowden’s voice forms the introduction to the song:

“Saying that you don’t care about the right to privacy because you have nothing to hide is no different than saying you don’t care about freedom of speech because you have nothing to say. It’s a deeply anti social principle because rights are not just individual, they’re collective, and what may not have value to you today may have value to an entire population, an entire people, an entire way of life tomorrow. And if you don’t stand up for it, then who will?” [Snowden and Jarre, 2016]

In The Guardian, Jarre describes the collaboration as a “hectic, obsessive techno track, trying to illustrate the idea of this crazy quest for big data on one side and the manhunt for this one young guy by the CIA, NSA and FBI on the other” [Gabbatt, 2016].

There’s an App for That (Generative Music). Developed with Sony Labs, “EōN”, released in 2019, was Jarre’s foray into providing generative electronic music on mobile phones. Although this had been tackled by others like Brian Eno some years earlier (“Bloom”), Jarre’s version incorporated the ability for him to include new segments and sequences through subsequent app upgrades and updates. Apps can be transient things, but if properly maintained, this could be the means for new instances of Jarre’s music to live on in perpetuity, for new songs to keep on being created long after he stops composing albums himself. And let’s hope that that won’t happen for a while yet. 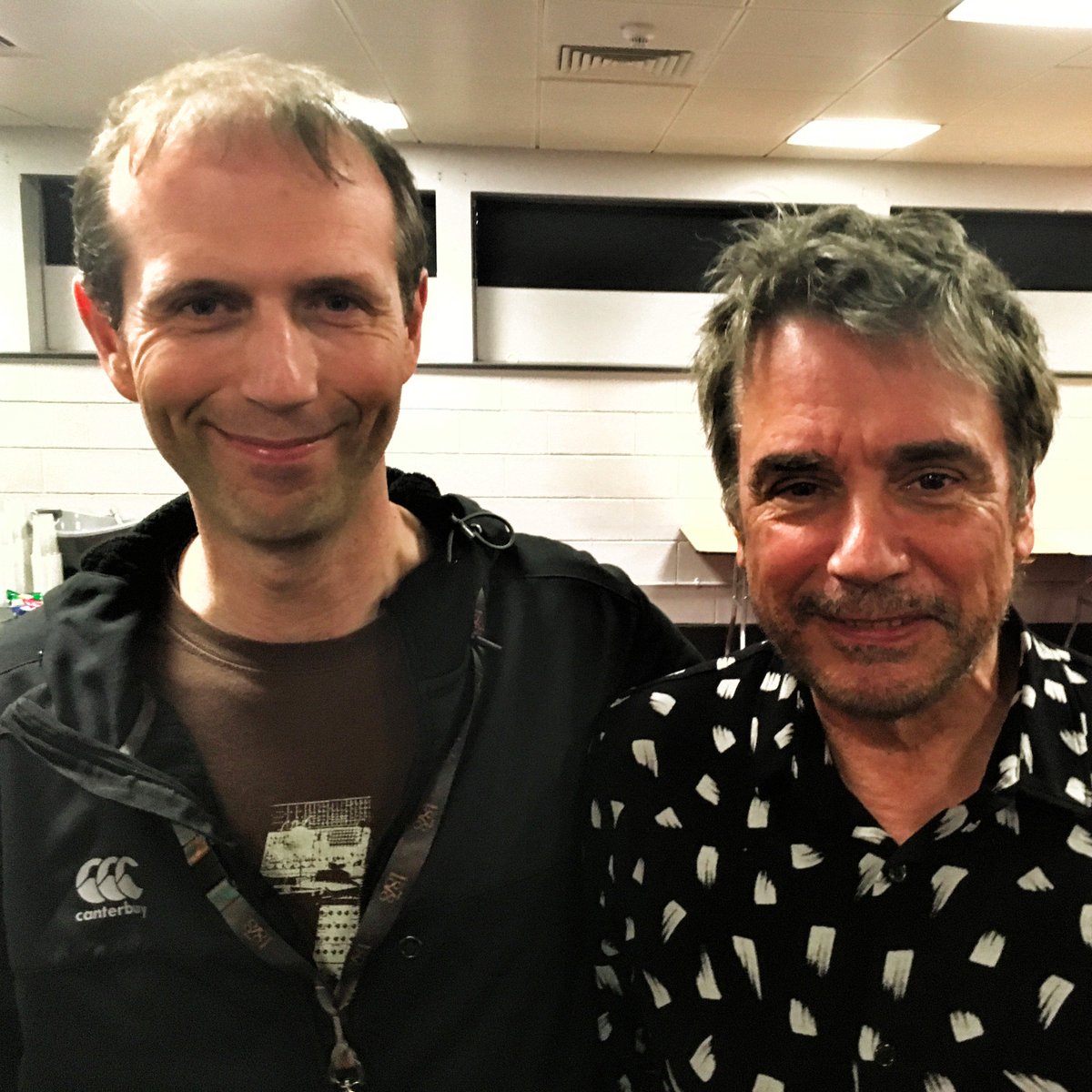